The End? of Earthly Coat

Oh my goodness. This update is quite overdue. A busy life has kept me from concluding my thoughts on the Earthly Coat experience. But I’m not so sure I should blame a busy life. Deep down, I haven’t wanted the Coat to be put to its “eternal rest”. But it’s been two months since the Minnesota Landscape Arboretum Dirt-O-Rama exhibit closed and the Coat was taken down, so I must face up to reality. (And if anyone is following the news, the American Psychiatric Association says that grieving becomes a classified depressive disorder after just two months so let’s not go down that path!)

As a result of my delay, this post is a big one. There’s a lot to show and share… 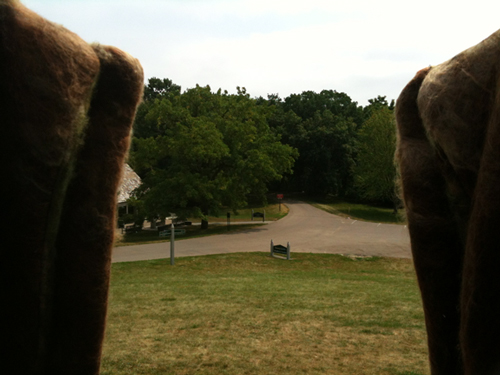 Here’s a late summer view from the top of the Coat. This was the same view my inner eye saw when I first visualized the project. I am grateful for actually being able to make that inner vision real.

The Coat survived the six months of a Minnesota summer fairly well. Only during the last few weeks did it really start to show signs of fatigue.

Last view of the front of the Coat. I was struck by the fact that, as summer turned into fall, the Coat and the surrounding environment faded in a similar manner.

Sun fading was a major factor in its disintegration. On the left you can see the area under the arm that was protected from the sun and to the right is the surface that was exposed to the sun. Major fading! 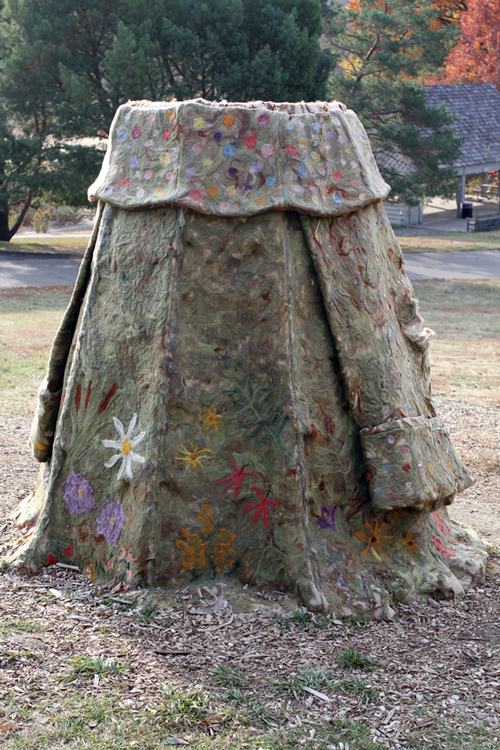 Last view of the back of the Coat.

The Coat continued to transform until the last day of the exhibit.

Grasses continued to grow into the base even during the drought conditions of this fall. Growth was supported since the Coat kept the soil beneath from drying out as drastically. This is a clear example of the beneficial effects of mulch.

The ground around the Coat had no grass growth but the soil beneath the Coat edge did!

Apparently some critter wanted pieces of the right sleeve for its winter home since there was a huge chunk of sleeve material missing by the time I took it down. That, and a general slough-off of the felted imagery, turned the Coat into a weary-looking beast.

The work of a critter’s “re-tailoring”! 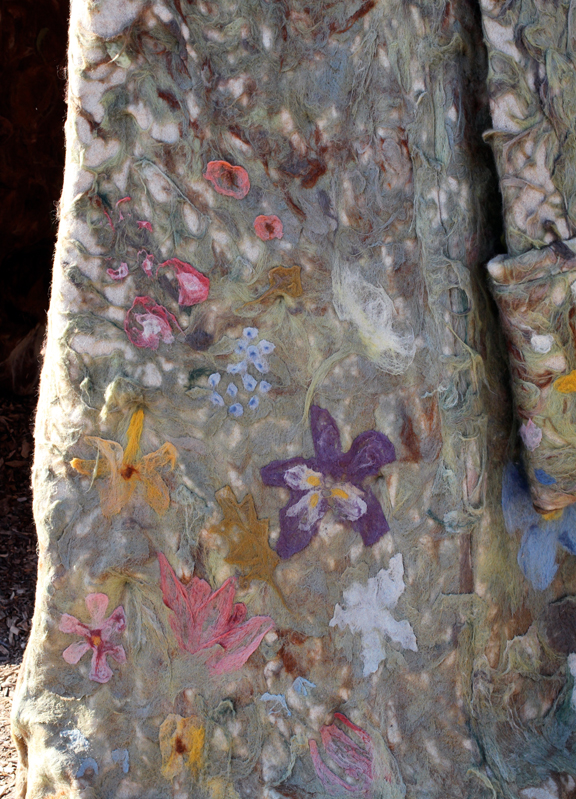 Even though the background was starting to show wear, the flowers still held their own. I believe this was because greater care was taken in felting the flowers onto the background and that made them more impervious to the outdoor elements.

All things considered, I have to say it still held a regal form and commanded attention up to the end.

I love this image of the old majestic oak tree seemingly growing out of the Coat!

Compared to the set up—which took several days in the hot, unbearable sun—the tear-down was a snap. We were in and out in less than 4 hours.

First, I took a scissor to one seam and cut apart the front edge from the back. 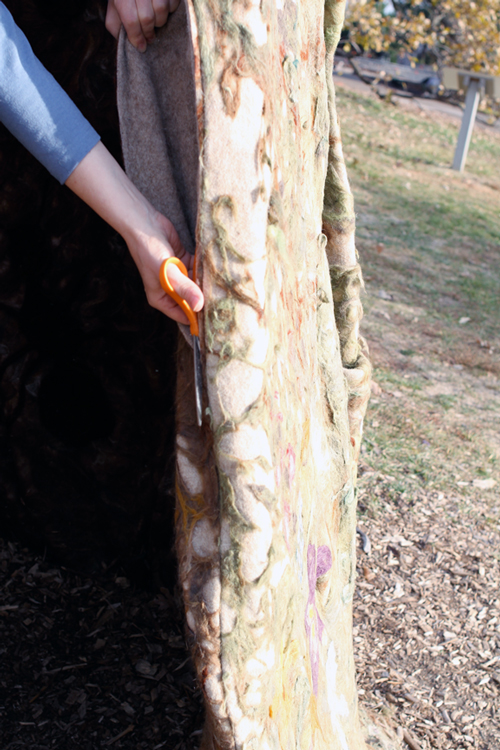 Cutting off the Coat from the metal armature.

That opened up the sides and we simply pulled the Coat material around the metal armature frame—along the way, cutting the sewn-in threads that held the material to the frame. I had wondered what sort of problems we might encounter when pulling the Coat ends out of the soil. No worries there. The material that was buried underground had disintegrated over the summer to a very weak fabric and it simply tore off at the base! From dirt it came and to dirt it returned, just as expected. Let this be a lesson when choosing what type of clothing to buy. Do you want a garment to last for eons (polyester, nylon) or something that will serve its purpose in your lifetime and leave a smaller footprint on the earth (natural fibers like wool, cotton, linen)?

Here you can see the effects of disintegration in the once-buried Coat edge. 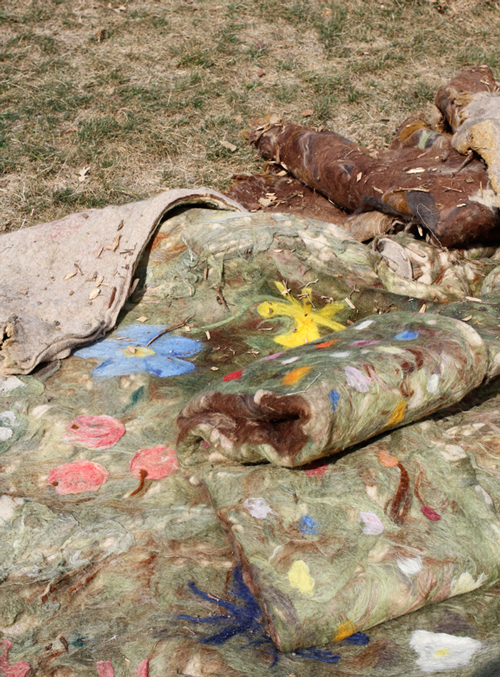 The now-removed Coat seems to become a part of the grasses around it.

After taking down the Coat material, we were left with the metal armature. We snipped off the plastic twist ties and the metal ones at the base, taking off the hardware cloth and digging the soil away from the structure as we went. Compared to the effort it took to get the structure in place, the removal was a joy!  The basic armature was finally revealed again and, after only a few turns of a wrench by a tall person (my sister—thanks sis!), the pipes were taken down and the structure lay around us in pieces. 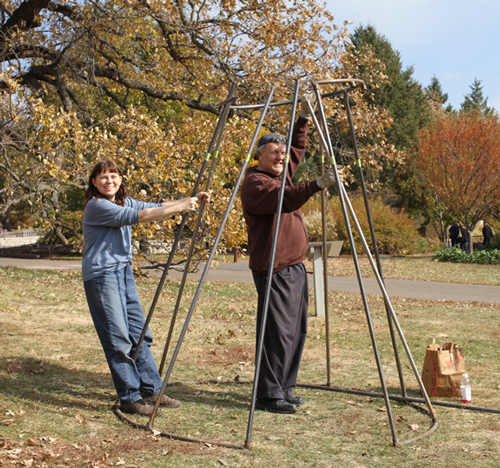 My husband helped me wrangle the unwieldy pipes. If you read the earlier posts, you’ll remember that this armature is like a Tinker Toy® construction—a carefully balanced structure reinforced by the “walls” of hardware cloth so when the walls are gone, you just pop out the pipes (after removing screws) and voilá!—it becomes a totally transportable form.

Earthly Coat is gone! All that remains is the armature trench and stump chair. You can see some of the armature pieces on the ground behind me.

Wow. That made it final. Earthly Coat was no more. 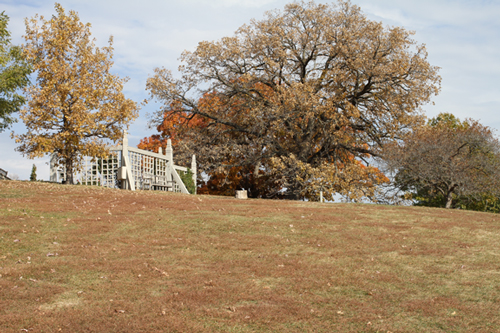 It’s gone! All that remained we when left was the stump “chair”.

This “adventure” has caused me ponder what sort of crazed mind would attempt such a massive effort only to destroy it in the end? Ah—the nature of an artist! I see it as a lesson in seeing (and feeling) the temporal reality of this world. We exist in one moment and are gone in the next. But what we leave behind is hopefully the art that remains in hearts and minds—and souls. Art can be found in the experience of joy, wonder, and curiosity. It doesn’t require a manifest physical existence to have a lasting effect. My hope is that Earthly Coat brought this experience to a few people and remains as a fond memory of a positive experience on this earth, bringing to life some considerations of how each of us puts a mark on the world—preferably for good—for peace—for love. I saw all these aspects throughout the summer. From families having a joyous, open-hearted romp around the Coat to couples sharing a cuddle inside the Coat’s protection to people pondering how their clothing choices impact the earth.

A game of Hide-and-Go-Seek.

Truth be told, the Coat DOES still exist, although it’s in pieces now. The Coat material is lying in our garden and has become a winter home for a wild rabbit. I will let it continue to disintegrate there, perhaps cutting it up further in the spring and spreading the parts around our woods as mulch and/or for creatures to use as bedding. The metal structure is in pieces in our garage but in the spring I plan to reconstruct it somewhere on our property. I’m going to wrap stainless steel wire around the armature vertically (like a weaver’s warp on a loom) and turn it into an ongoing outdoor weaving. So you might say it will be reincarnated as a new art piece in the spring—the time of rebirth! I’m not sure what its ultimate fate will be in this form. Perhaps it will become another art piece that may be moved elsewhere if interest exists. Or perhaps it will remain here as a private garden structure/sculpture on which climbing plants can grow and something that I may continue to play with and enjoy sitting within. I believe the funnel/tee-pee-like shape creates a remarkable space for deep thoughts and creativity so I will put it to good use if its ultimate existence is the latter.

Future of the Blog & Recent News

I will keep this blog going with periodic news and updates on the structure’s rebirth and other tidbits of this creative life.

The first bit of news I want to share is regarding my upcoming YarnWorks book. I believe it IS finally “upcoming”. The original publisher (Quayside/Voyageur Press) has had it on the back burner for the past year while changes were happening in their business organization. They have finally restructured the business and the book is now being published by Creative Publishing international—one of Quayside Publishing’s “craft” publishing branches. We expect it to be in bookstores in September of 2013.

I dove into a LOT of research and hands-on projects during the writing of YarnWorks—more than could even fit into the book. So my next post is going to begin showing some of the behind-the-scenes work involved in the creation of the book. I hope you will keep tuned in!

2 Responses to The End? of Earthly Coat